Follow this blog to be advised of new material being added to the Time Travellers website. See below right.

The Swamp Vanishes - an online exhibition 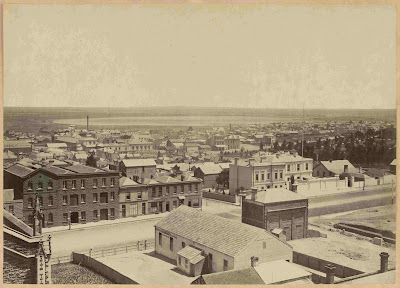 In this view of Melbourne, looking south west, taken by John Noone in 1869, the West Melbourne Swamp can be seen lurking unhealthily in the background.  By this time the swamp was evil-smelling and thought to be the source of disease.  Before white incursions, however, the swamp enabled large gatherings of First Nations people to gather for ceremonial, social, and law sessions by providing a veritable larder of food. (Royal Historical Society Collection, S-1292.001)

The Swamp Vanishes traces the slow eradication of what was a significant resource for the Kulin Nation for millenia.

This exhibition, curated by me, was launched at the RHSV in late January 2020, but lockdowns brought a reduced opportunity to view the exhibition.  As a  result, the RHSV has now made the exhibition available online. 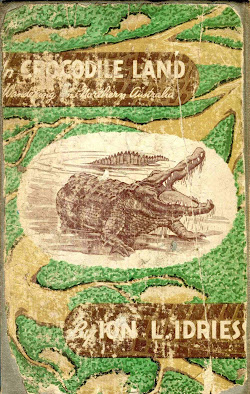 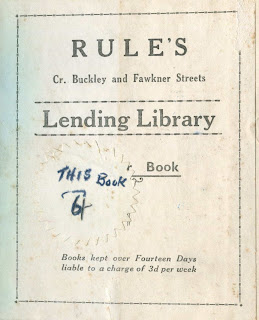 This book turned up recently in the Book Nook, Christ Church Op Shop, North Essendon (corner Marco Polo St), from a former lending library, recalling for us the days of circulating libraries dotted about the suburbs.

Mrs Rule ran a confectioner's shop (cakes, or possibly a milk bar) with the library as a sideline.  Mrs Rule died in 1950 and the business was thereafter run by her son, Frank Rule.  The business in the 1960s has been recalled as a milk bar, fancy goods and stationery shop.  Does anyone remember it when it also had a lending library?

You can learn a bit more about Mrs Rule's Lending Library by clicking on the link.

Posted by Lenore Frost at 09:35 No comments:

Email ThisBlogThis!Share to TwitterShare to FacebookShare to Pinterest
Labels: libraries

See this tribute to the workers of the Red Cross Wounded and Missing Enquiry Bureau and the post-war work of the Australian Graves Detachment and Graves Services men who retrieved the remains of the fallen to bring together into a Commonwealth War Graves Cemetery.  The Missing.

This media item is licensed under Attribution-NonCommercial-NoDerivatives 4.0 International (CC BY-NC-ND 4.0). You may share (i.e. copy, distribute, transmit) this item provided that you attribute the content source and copyright holder; do not use the content for commercial purposes; and do not rework (i.e. alter, transform, build upon) the material.

Posted by Lenore Frost at 21:59 No comments:

William F Salmon and the Evolution of a Park 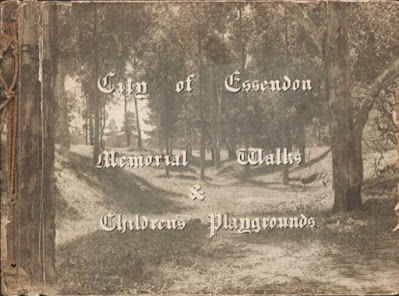 On 1 September 1918, mere weeks before the Armistice, William Frederick Salmon's only son, Percy Salmon, fell at the Front.  Two months later, Salmon offered to the Essendon Council 8 acres of parkland, planted and nurtured by himself over a period of years, as a memorial to "Essendon's brave soldiers".  The reserve became known as Salmon Reserve.  The Council took over the maintenance of the reserve, though it was a further 14 years before the land was transferred to the Mayor and Councillors of Essendon.  And when the land was transferred, it was four acres, not eight.

Marilyn Kenny in her usual inimitable style, has had a detailed look at why the transfer took so long, and why the size of the land had shrunk to four acres.

William Salmon came very close to succumbing to the last major pandemic in Australia - the influenza epidemic - and caused a local sensation by remarrying from what was tantamount to his deathbed.  He married Annie Laing Reid Sutherland, the sister of his doctor, Bertram Sutherland, with Salmon's three daughters and husbands strongly disapproving of this deathbed marriage.  They refused to attend the wedding. If you want to know the outcome of this strange affair, you can find more details on the Time Travellers website. 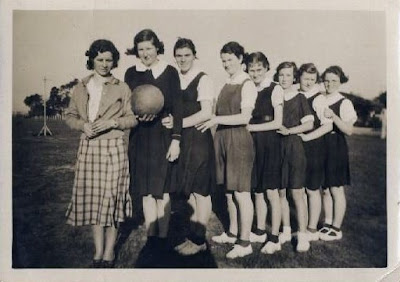 With some help from the "We Grew Up in Strathmore, Essendon ad Nearby Suburbs" Facebook group, this photograph has been identified as showing a Strathmore Presbyterian Basketball team, in 1938.  Third from left is Ruby Kettle, and far right is Annie Jean Cook. The team was associated with the Strathmore Presbyterian Church in Uplands Rd, Strathmore.  The two identified players both attended Flemington Girls School.  You can read more about this team at the Time Travellers website.

Posted by Lenore Frost at 21:36 No comments: 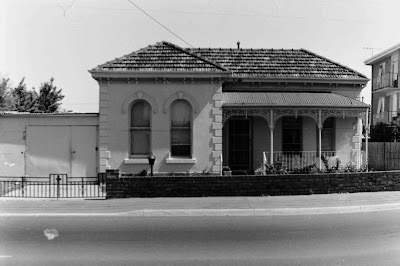 Although there is little available in terms of official records for the school, Jill Ridgway has put together a comprehensive picture of the operation of a private school which commenced as a family business and rose on the talent and strength of its principal, Margaret Hester Butler. Trained in the State education system, Margaret Butler created a successful academic school, which in its heyday had 130 pupils, helping many achieve excellent scholastic results.  In the end it was unsustainable, dependent as it was on one personality, and towards the end beleaguered by the changing regulatory environment.  If parents were satisfied by the crowded conditions of this school and others, the Education Department was not.  Jill has also created a list of students known to have attended the College.  Maybe you will find one of your relatives in the list.

Glenthorpe College was typical of many private schools in this period, so even if you don't have a family member at this school, Jill's story will shed light on other similar schools.

Posted by Lenore Frost at 12:17 No comments: 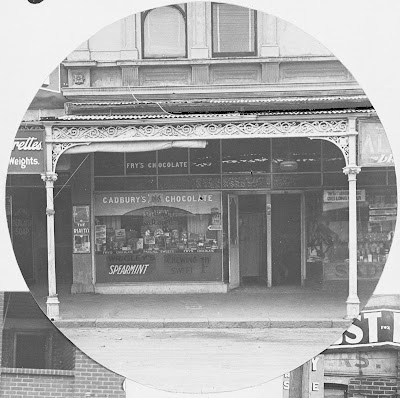 This shop was a little hard to identify, but with what appeared to be a saddle in the window of the shop to the right, and the beginning of a word 'SAD' at the bottom of the next door window, I went looking for a saddler's shop next door to a confectionery shop. On the left side of the confectionery shop is a shop advertising Medicated Soap, Weights (possibly scales), and cigarettes. This combination of shops appeared in Mt Alexander Rd, in the 1925 Sands & McDougall Directory:

In the window of the confectionery shop is an indistinct painted sign, saying "The Premier Tea Rooms". The store stocked Wrigley's Spearmint Chewing Sweet, Pascall Sweets, Fry's Chocolate and Cadbury's Chocolate. It must have been a great relief to Wrigleys when someone came up with the idea of replacing "Chewing Sweet" with "Gum". You can learn more about Mrs Harding and her Tea Rooms at the Time Travellers website.
Posted by Lenore Frost at 21:17 No comments:

Lenore Frost
I am a community historian (ie, not paid) from Essendon. The content of my Empire Called database (see the link to the PBWorks website) is the result of nearly 25 years' research. The Empire Called blog is a companion for the PBWorks website of the same name. Time Travellers in Essendon and Flemington is set up in the same way, with a website and a blog to report additions to the website. The website is a vehicle to publish longer pieces of research that are too long for newsletters, various indexes, and photos of local history interest. You may find something of use for your research.